Method 1 and Method 2 are Terrain Clearance Planning Tools, only.

FAR 121.191 requires that we dispatch our aircraft on a routing, weight and expected enroute temperature, that complies with a minimum terrain clearance requirement after an engine failure.

It also requires that we have a plan in place that allows a diversion to an alternate airport enroute,  following an engine failure and drift down, with a specific terrain clearance if we do not have the performance to continue to the destination.

The above was a little wordy   ... so the bottom line is ... we have to get to the destination after an engine failure with terrain clearance, or have a diversion plan in place.

Method 1  -- Your everyday, JFK – BUF flight.
Very little or no terrain to clear during a One Engine Drift Down.

Engine Out Terrain Clearance - 5sm either side of planned route by 1000 feet.
This is the normal method used on most of our non-terrain critical flights.
There is no engine out plan specified or required in your dispatch release.

If an engine failure occurred the aircraft could continue along the filed route, or return to its departure point and still maintain terrain separation.


If Method 1 will not provide Engine Out Drift Down clearance, METHOD 2 is used. (JFK – SFO)

Engine Out Terrain Clearance - 5sm either side of specified route by 2000 feet.
Flight has a defined Engine Out Plan.
More monitoring by dispatch.
Trip is divided into segments, much like WATRS ETP Planning.  (Points listed as M2-1, M2-2, M2-3, etc)
Terrain Critical segments are identified with planned diversion airports on Release -Terrain Page.
Points are identified by Lat / Long, and by reference to a fix.  (MCI / 470) (470 nm after MCI)
PBD points can be entered on the flight plan, to assist the pilot as they pass through segments .. ie; (MCI/+470)

Between M2-1 and M2-2, your planned diversion airport is currently –KCOS

This does not mean you have to go there, but rather you have the performance to clear the terrain to get there.

There may be circumstances when you may choose to divert elsewhere.

M2-2 begins at 572 nm after MCI, your planned diversion airport is now – KPVU

Again ... This does not mean you have to go there, but rather you have the performance to clear the terrain to get there.  There may be circumstances when you may choose to divert elsewhere.

If you enter these diversion airports as ALTERNATES in JeppFD Pro, they will display on the enroute view.

In this example, after that point, you may continue on to SFO with Terrain Clearance.

Remember this is a Terrain Planning tool, only.

This does not mean after M2-3, you must continue to KSFO, but only that you have terrain clearance and performance to continue. 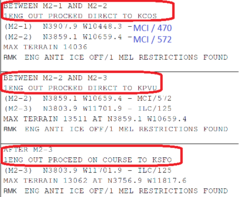